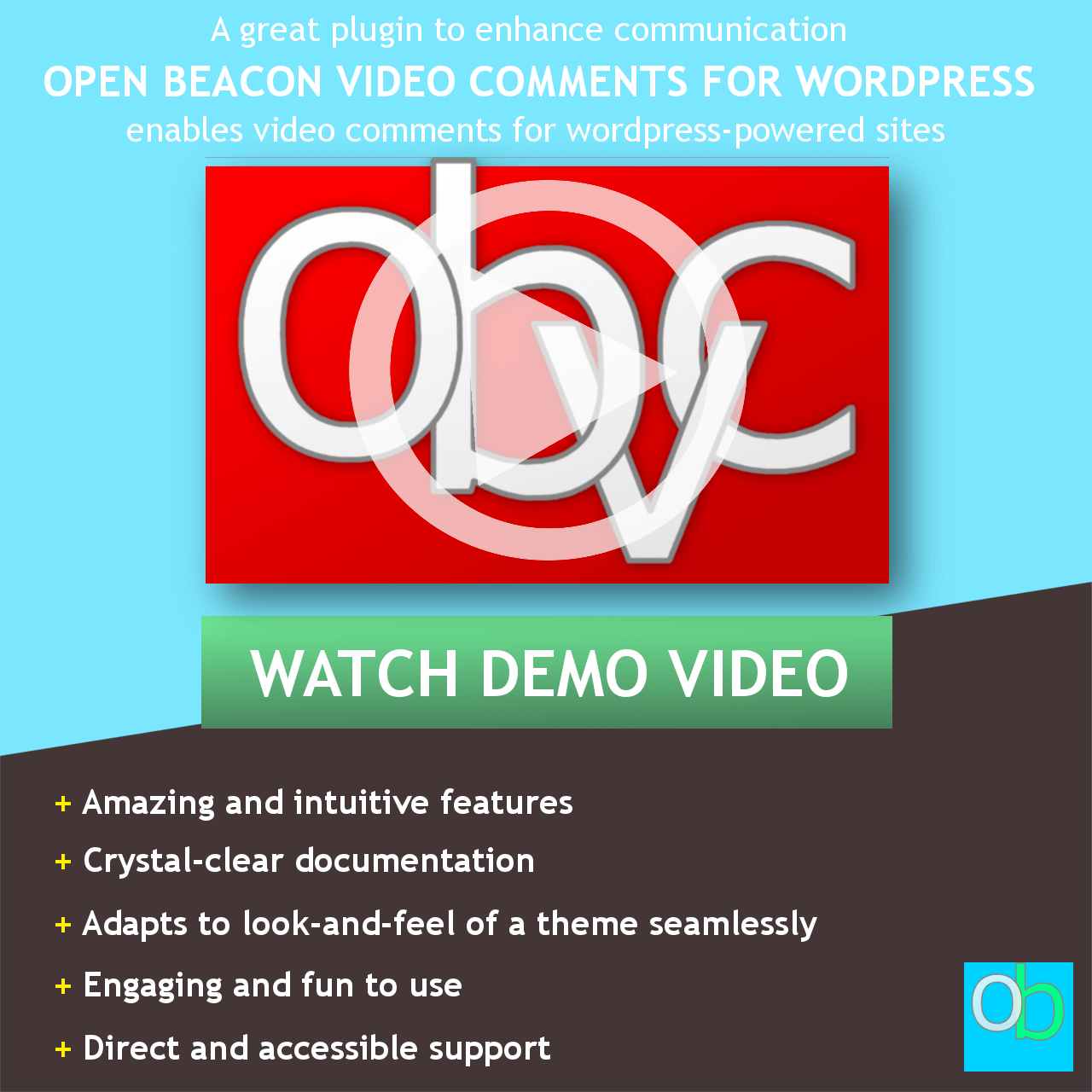 is an intuitive and
easy to use plugin that enables video-based comments for posts on
WordPress sites.  It serves as an alternative to generic
text-based comments.  Not only is it easy to setup and easy to
use, it taps into the visual way in which humans naturally interact;
as a result, the experience of using OB Video Comments is very
compelling and engaging. 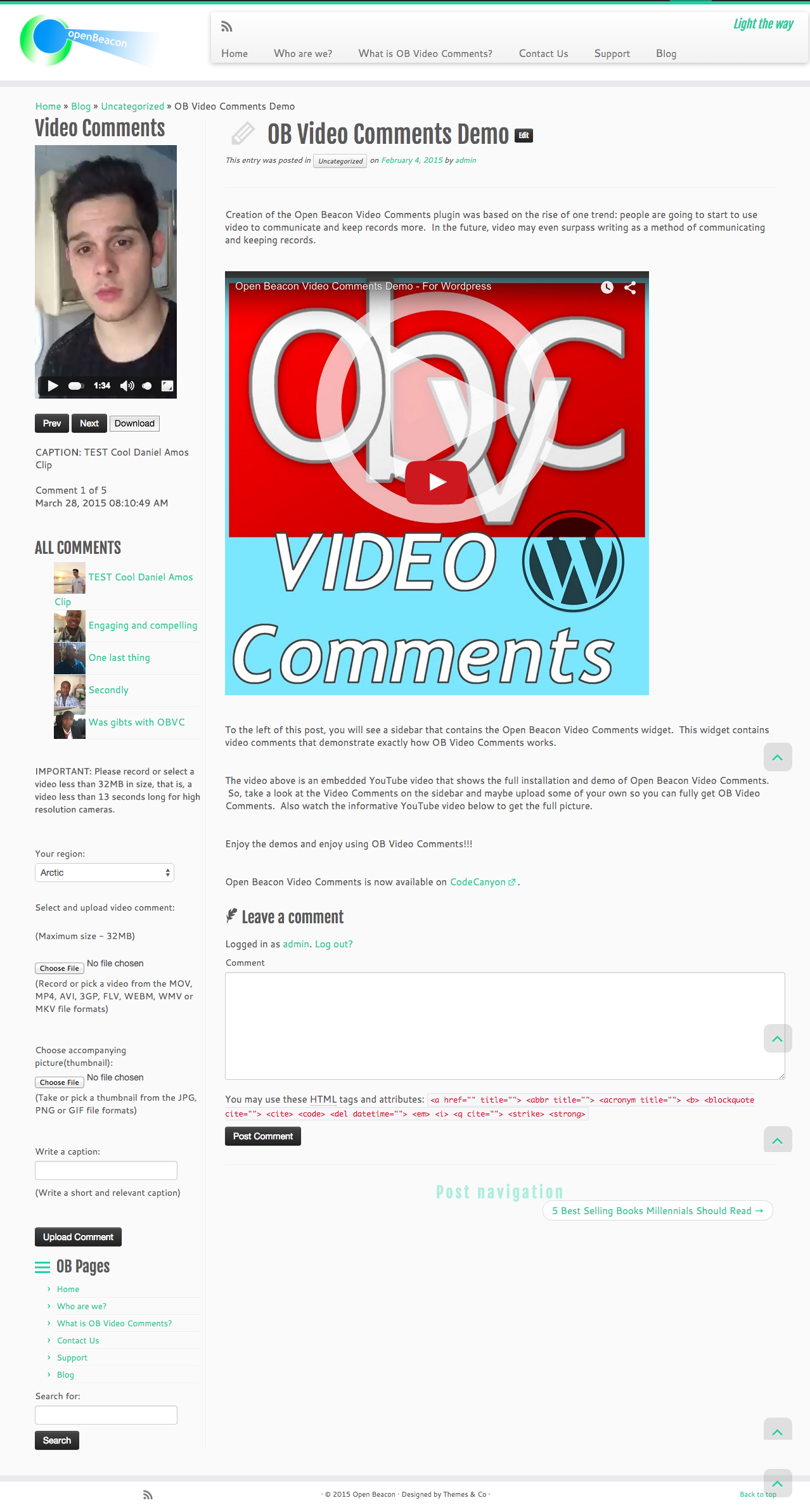 In the same way as text-based comments, visitors can easy view other
people’s comments in response to an article or upload their own
comments as well. 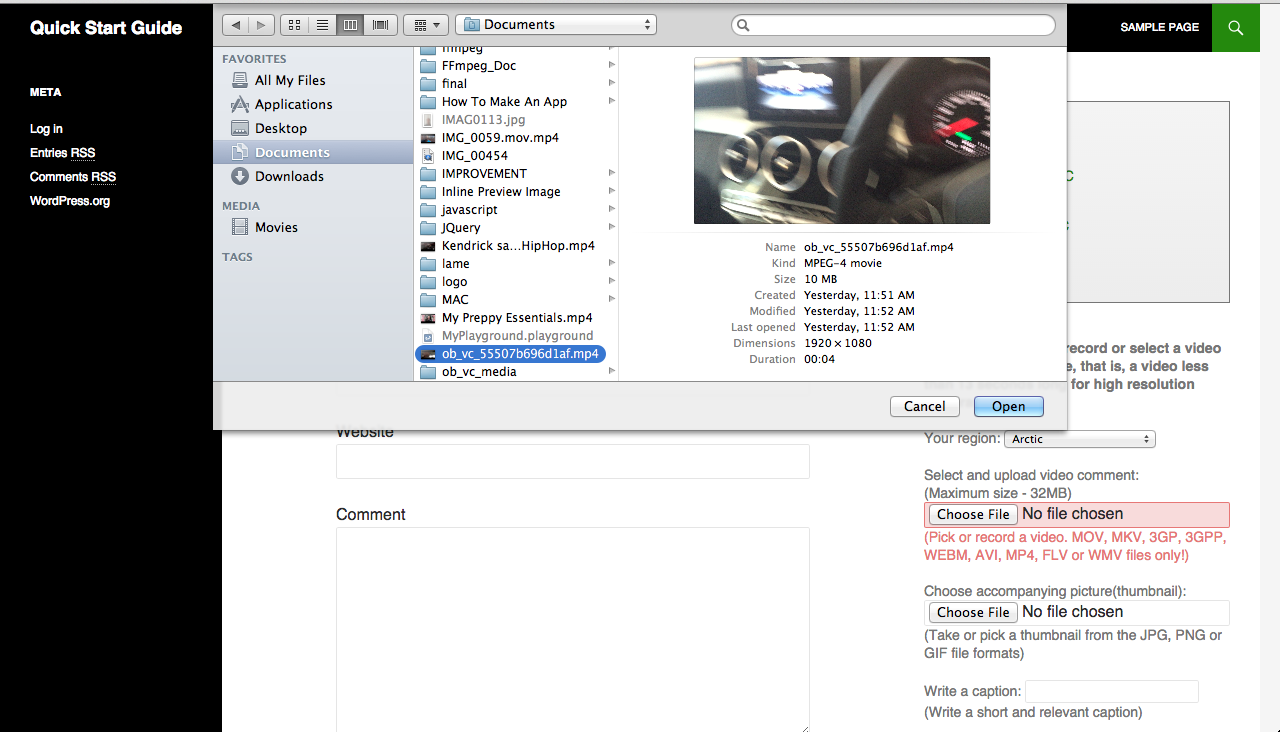 When installed, the plugin presents backend (dashboard) and
front-end functionality.  The front-end is a widget that can be
placed on any bar but preferably on the left or right sidebar,
adjacent to a post on a “single page”.  This widget gives users
the ability to view video comments and create some of their
own.  The backend has a settings page through which the
functionality of the widget can be adjusted and also a video comment
list through which video comments and their metadata can be viewed,
edited and deleted. 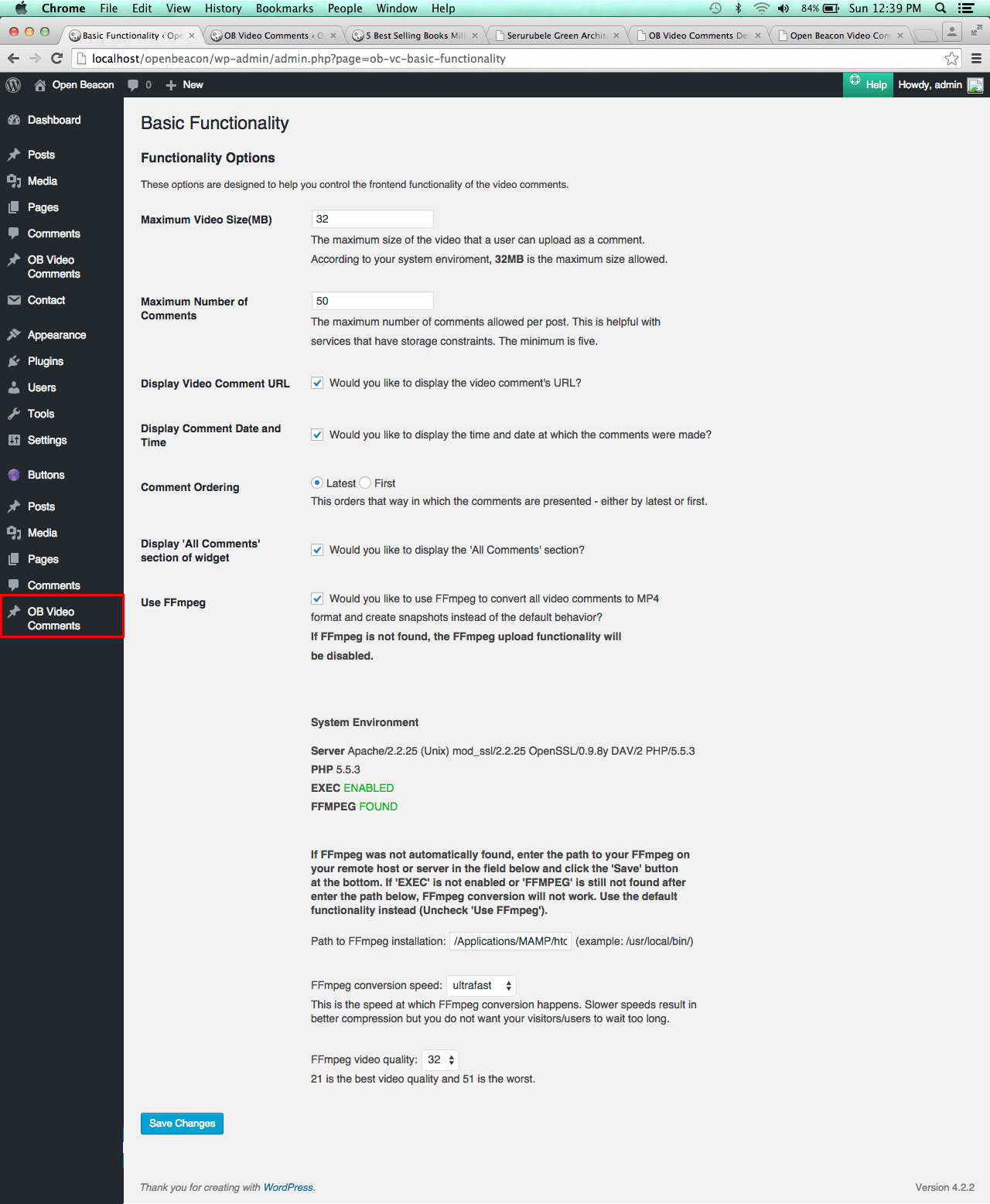 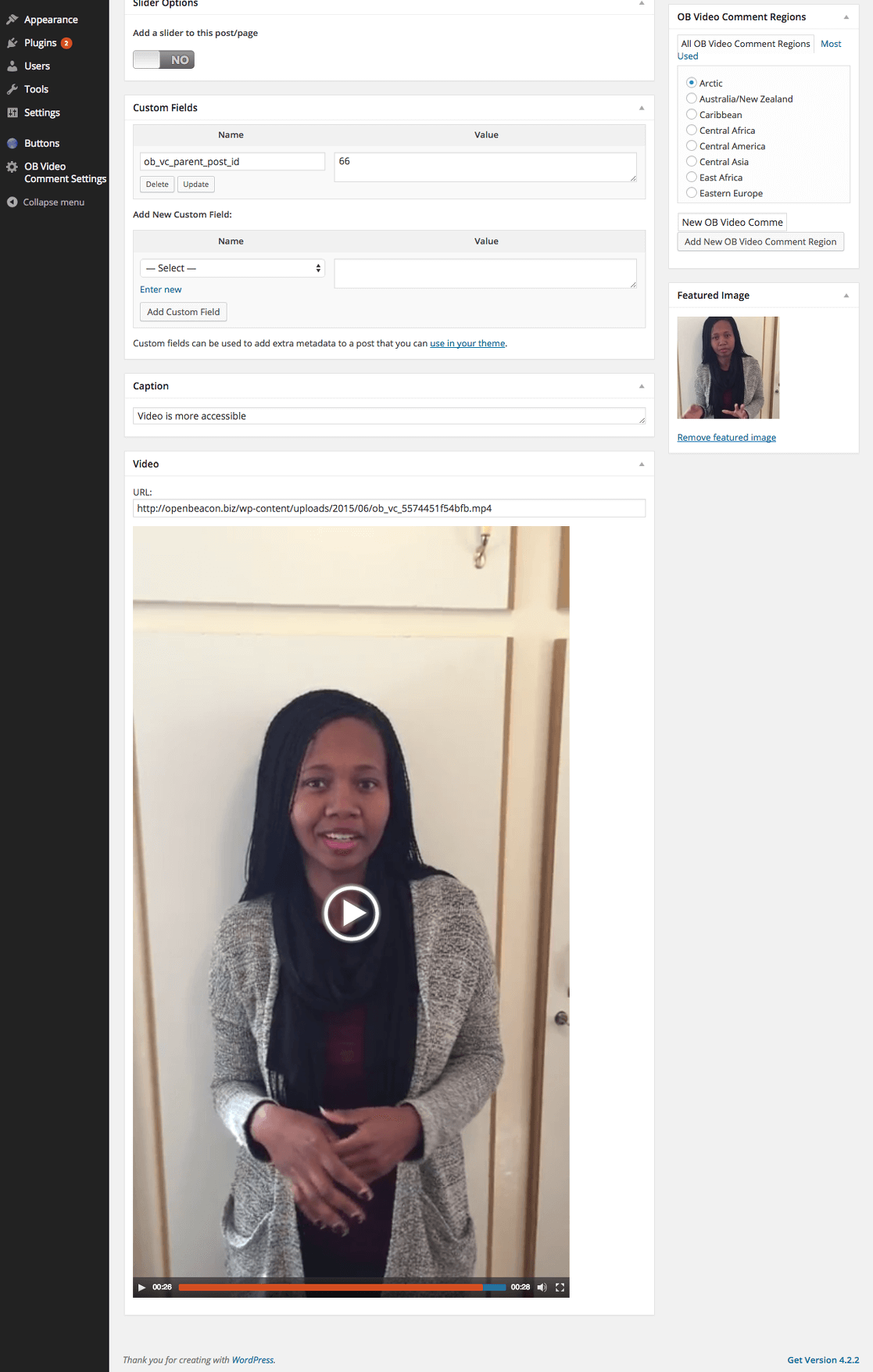 Installation of the plugin is a straightforward affair: activate the
“Open Beacon Video Comments” plugin and then go to Appearance ->
Widgets and place the “OB Video Comments” widget on the sidebar of
your choosing.  That is it, you are done with installation.
Visitors/users can then upload video comments, accompanying
thumbnails and captions in response to a post they have read.

The thinking behind OB Video Comments

Zeitgeist – the world’s inundation with video is the quintessential
spirit of our time.  Video seems to be readily available on all
platforms and seems to be taking over as the primary way of
communicating and will probably be used extensively in
record-keeping as well; because of this growing trend, we found it
fitting to start offering comments in video format.
People are visual/spacial – the human race is primarily
visual/spacial both in learning and creating.  As such, video
comments seem to be the most natural way to offer commentary.
Countering the growing “mean comments” trend caused by anonymity –
anonymity gives normal and good people the leeway to make shocking,
cruel and sometimes bizarre statements without putting a face to the
words.  We believe OB Video Comments can curb this tragic trend
and encourage people to interact in a clearer and less hostile way.
Ubiquitous camera on computers, phones and tablets – cameras on
computers, tablets and phones have become so commonplace, it is
impossible to imagine a world when it was not so.  This
availability of cameras and video demands new and more interesting
ways for people to interact.

The demo video does not show the URL feature
that is now available with v1.0.2.