You can have your elements unfold, spin, twirl, flip, slide elastically and plenty more. You can also change the duration and starting time of each animation so that you can chain them together to achieve awesome effects.

CSS Animator was built specifically for easy usage in Visual Composer, and fits excellently in VC’s drag and drop interface. Adding CSS animations is just as easy as dragging your elements inside a CSS Animator element.

Works great with any theme

View the demo site and open your mind to the possibilities. The demo site showcases all available animations and features.

After You Install CSS Animator, a New Element Will Be Available in VC 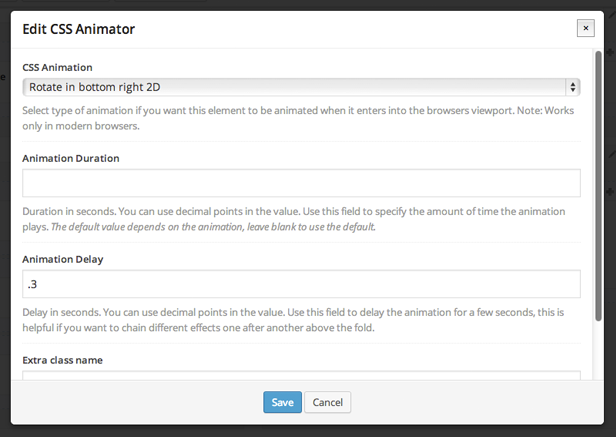 Then Drag Your Elements into the CSS Animator Element

If you want to include this as a feature in your themes, CSS Animator cannot be embedded. You can however include the plugin zip file in your release as long as you purchase an extended license. Be sure to let me know of your theme so we can feature it here!

Having Trouble with the Plugin?

Be sure to leave a rating and review and show us some love.

Check out Our Other Visual Composer Addons